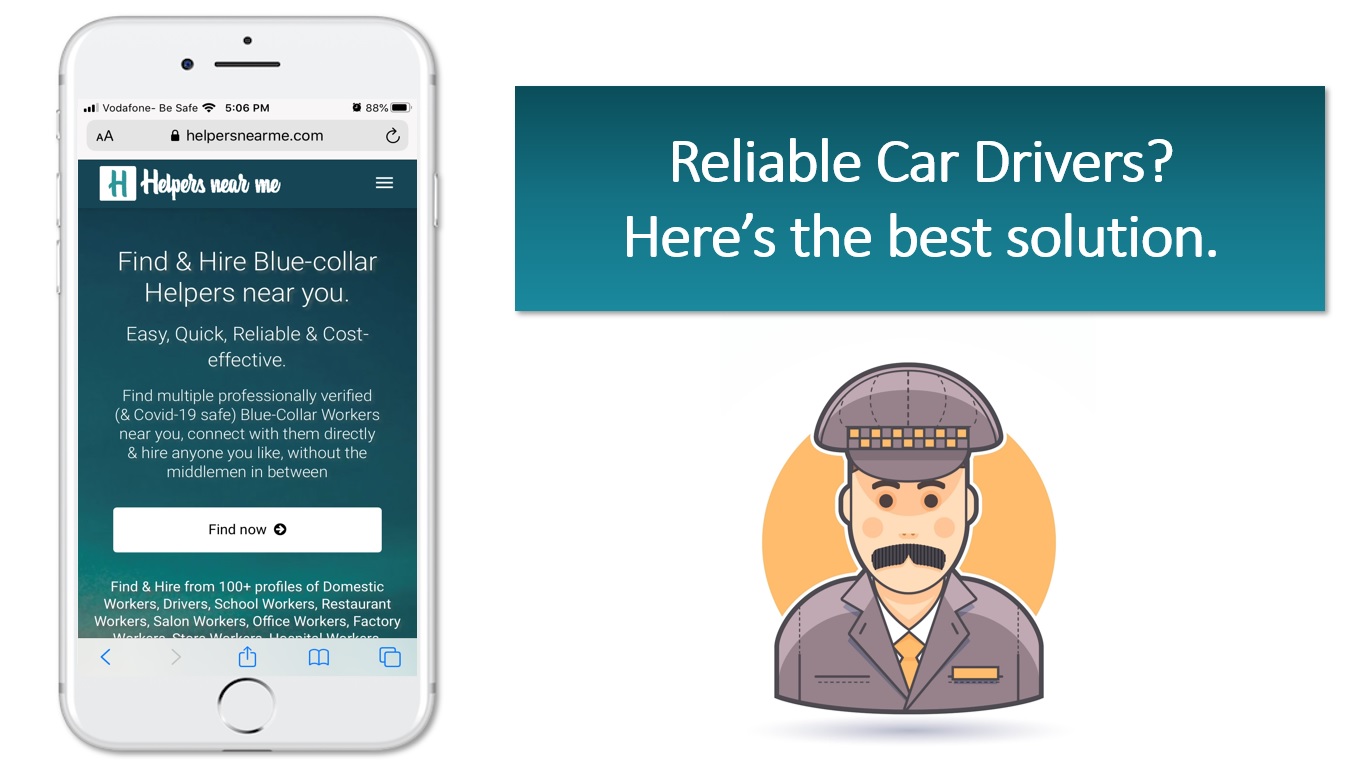 If you are looking for permanent car drivers near you, try Helpers Near Me.

Private Car Drivers or Commercial, you can connect with many near you in just 5 minutes.

For most of us living in Metro cities, having a Private Car Driver at times seems like a necessity.

Some of the days, even if you have to travel only a few kilometres, the roads are always so jam-packed that even half an hour drive takes a minimum an hour and a half.

Especially in the peak morning and evening, managing a bumper-to-bumper drive not only takes away all your energy but also keeps you away from some of the essential things that you might have done if you had a driver.

When you drive your car, all through the day, and all by yourself, it is quite a task.

Here are some of the challenges of driving yourself:

These are just some of the multiple challenges that many of us face.

Having a Private Car Driver just solves most of the issues:

By having a private car driver all your challenges go away. Plus, he’s always available on call

However, there’s still one big challenge.

How do you find Private Car Drivers?

There aren’t enough options available when you are looking for permanent car drivers.

Your first thought is asking your friend, neighbour, nearest security guard or people who are working at your place.

Sure you can find car drivers by this approach. However, it would take minimum a week or a few weeks time by the time you find one.

Your second approach is finding car drivers online or through an app for Driver.

You may find a few options here as well.

But the usual options that you may come across are those where you get a Driver for the day or for a few hours, where you pay them on an hourly basis.

However, this option doesn’t work out all the time.

Because if you own a car, your need for Car Drivers is not on an hourly basis, but for the one who can work for you on a permanent basis.

It is an app for driver, where you can find & connect with multiple permanent private car drivers around your location.

It solves the problem of finding & hiring a car driver on a permanent basis in the easiest possible way.

Even the charges are nominal – starting at Rs.99/- only, and you get to connect with multiple car drivers around your search location.

Having this kind of choice ensures that you get the car driver who is well experienced, understands the city well, and also fits into your budget.

Here are 11 promising reasons why you should try Helpers Near Me when you are searching for car drivers:

Helpers Near Me App for driver is an Easier, Simpler & Better way of finding car drivers.

5 minutes and just a click of a few buttons, that’s all it takes to find permanent & private car drivers at Helpers Near Me.

To find and hire a Driver was never as easier and as organised earlier.

Helpers Near Me App for Driver follows a 2/3 Step Verification Process for every Driver who joins the platform.

Furthermore, you can also get your current Driver verified by this process.

It does not matter if he was hired from Helpers Near Me, or elsewhere.

The primary objective is to help you get proper due diligence done for your Driver before hiring him, or soon after you’ve hired him.

3) Connect with nearby Drivers

At Helpers Near Me, you get an easy answer to “drivers near me”, preferably within 1-3 km of your search location.

4) Speak to multiple Car Drivers at a time

If available, Helpers Near Me App for Driver connects you with multiple Car Drivers from nearby, and not just one or two.

Honestly, who doesn’t prefer choices, more so when you in immediate need to hire Driver.

And moreover, when you would want to hire a Driver permanently, you would always want to meet with a few and take trials of the shortlisted one before deciding who to hire.

5) Find & Hire a Driver at a nominal fee only

At Helpers Near Me App for Driver, you get to connect with multiple car drivers at a starting fee of ₹99 only.

Only except when you would want to get access to the driver’s background verification report.

A unique rating system allows Helpers Near Me to connect you with the best Drivers from around your search location.

7) Empowers the Drivers to connect with you directly

Helpers Near Me supports the Drivers & other workers, in finding nearby work opportunities.

The platform does so by connecting the Drivers directly with you.

By connecting directly with you, he gets to decide and opt for the work, out of his own will.

No one influences his decision.

Furthermore, the Driver gets to decide his own salary as well.

In turn, this process helps him take control of his life and his source of income.

The Drivers & other workers join Helpers Near Me free of cost, and on their free will.

At Helpers Near Me app for driver, since you get to connect with the Drivers directly, hence, there are no middlemen & commissions in between.

It is a straightforward digital platform that brings you and the workers together, Driver in your case so that you connect and take care of each other’s requirement.

9) The Driver gets to earn his full salary

Every Driver who gets hired through Helpers Near Me gets an opportunity in his life to earn his full salary.

Without having to pay commissions to someone else in between, he gets all that he earns.

Every transaction processed at Helpers Near Me goes through the recognised payment gateways like Paytm, PayU & others.

Your details are entirely secured & protected against any unauthorized transactions.

Every transaction that you go through here comes with an assurance of helping you find & hire a Driver or any other worker that you might want to search on the platform.

Imagine what this kind of convenience brings to you when you are searching for Car Drivers.

This sort of comfort solves all the trouble that you had to take otherwise to find a Driver.

So, next time when you need to hire a Driver, try Helpers Near Me.

By far, Helpers Near Me is the easiest way you can find a Driver.

Along with Drivers, Helpers Near Me also has many other workers registered on its platform, who work at Homes, Offices & Small Businesses. Like Cooks, Drivers, Babysitters, Security Guards, Beauticians for your Parlour business, Helpers for Elders, Car Washers and many other such Helpers.