Home » How to find genuine Maids in Delhi for part time? 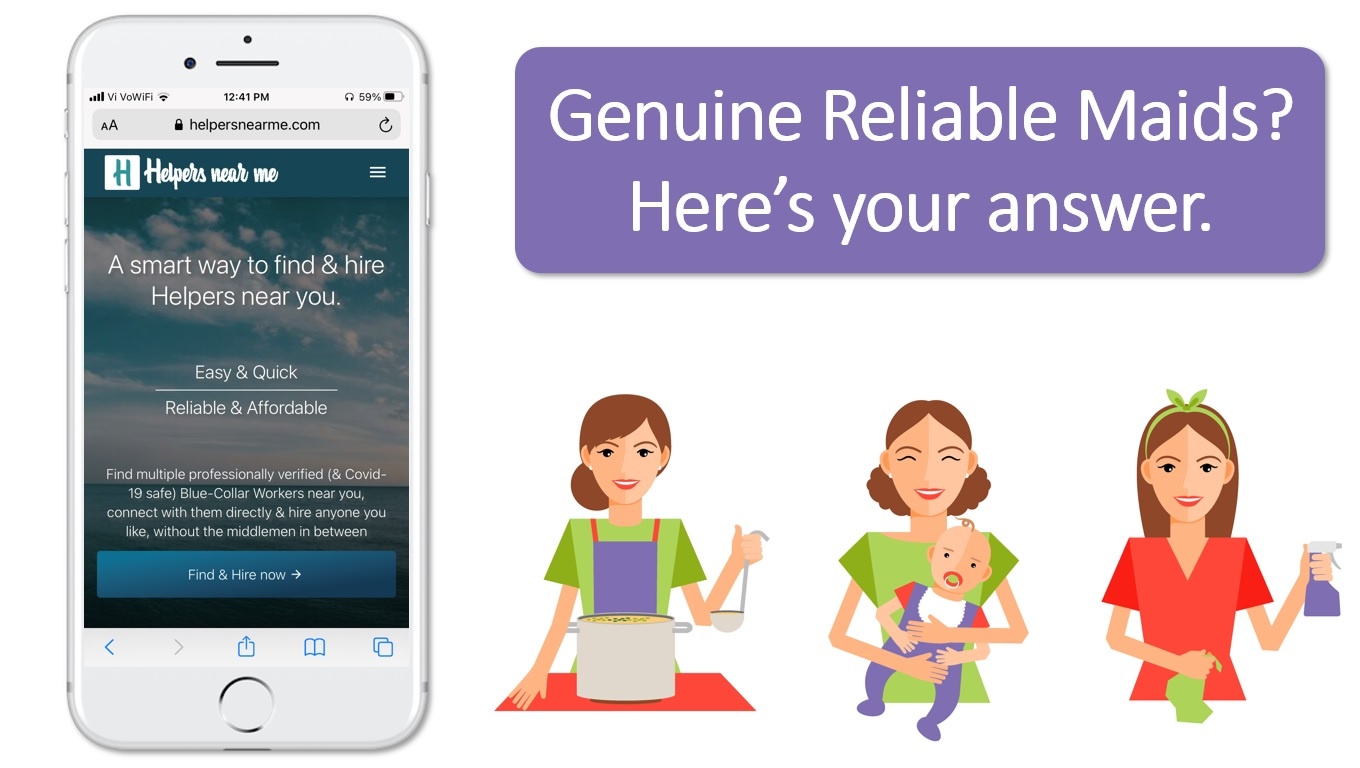 Finding Maids in Delhi for part time (or full time) is not a challenging task anymore.

Try Helpers Near Me and connect with several maids near you today.

Maids in Delhi for Part time or Full time – Always a big challenge!

Over the years, cities of India have unbelievably transformed themselves.

This change in cities has a significant impact on the lives of people living in it.

The regular working hours per day which was around 7 hours earlier has now expanded to 9-10 hours a day.

People are spending extended hours of time in their offices, and as a result, the time a person spends on oneself & family has reduced to a great deal.

As expected, this change has brought limitations on the amount of time one spends with self, with family, friends & relatives.

And on top of this, there are hundreds of household tasks that take countless times.

And especially, if you are the lady of the house, you end up ensuring a whole lot of things, almost every day.

These are all critical & essential tasks, but very time-consuming as well.

So, in your busy life, how do you ensure you get everything done? That too everyday?

Would it not give you great relief if there were extra helping hands to help you with all such tasks?

Sounds interesting on the face of it, although finding such Helping Hands in a city like Delhi has always been a challenge.

Asking the nearest friend and neighbors could only get you a few options, that too in about a few days or weeks time.

‘Helpers near me’ is a mobile & web based App that lets you find Maids in Delhi for Part time or even Full time Maids in just a few minutes, that too at a nominal fee starting with Rs.99/- only.

Here are 7 compelling reasons why you should try ‘Helpers near me’:

‘Helpers near me’ connects you with maids in Delhi for Part time or full time available in your vicinity. By far, the platform is the most convenient way one can find a Part time Maid nearby.

Many things costs, but some of the things in life should not cost you as much. More so when you are obliging somebody by giving the person a means to live a better life. At ‘Helpers near me’, you can connect with multiple Part time Maids at a nominal fee only. There are no charges beyond this.

‘Helpers near me’ has hundreds of Maids (Full time & Part time), Cooks & Babysitters registered on its platform. And they’ve all become a part of ‘Helpers near me’ just so that they could get in touch with nearby Employers directly.

‘Helpers near me’ follows a 2/3 Step Verification Process for every Maid registered on its platform. Every Maid’s IDs & Criminal/Court Records gets checked in detail. And at a nominal fee of Rs.199/-, you also get access to the detailed report on the Maid’s background

5) Choice of finding Multiple Maids in Delhi for Part time

With every search, ‘Helpers near me’ connects you with multiple Maids from around your search location. Imagine connecting to several Maids, Cooks & Babysitters at the touch of a few buttons only

6) Free of Cost for Maids

Every Maid & other Helpers registered at ‘Helpers near me’ comes on board without paying any money to anyone in between. It is a ‘Free of Cost’ service for them.

7) No Agent, Contractors or Commissions in between

In the process of connecting the Maids to you, there are no middlemen involved. ‘Helpers near me’ never works as an Agent or a Contractor. It is a free platform for all Unorganized Workers (Maids, in this case). They can become a part of it and connect with nearby Employers (You, in this case) directly.

So, whether it is for doing the house cleaning, gardening, assisting the elders, taking care of babies or helping you in the kitchen, finding maids in Delhi for Part time or even for Full time is not that difficult anymore.

Try Helpers Near Me today!

At ‘Helpers near me’, you can also find Drivers, Babysitters, Security Guards, Store Helpers, Delivery Boys, Waiters, Salon Helpers and much more of such Helpers.