Home » How to find a reliable Babysitter in Gurugram? 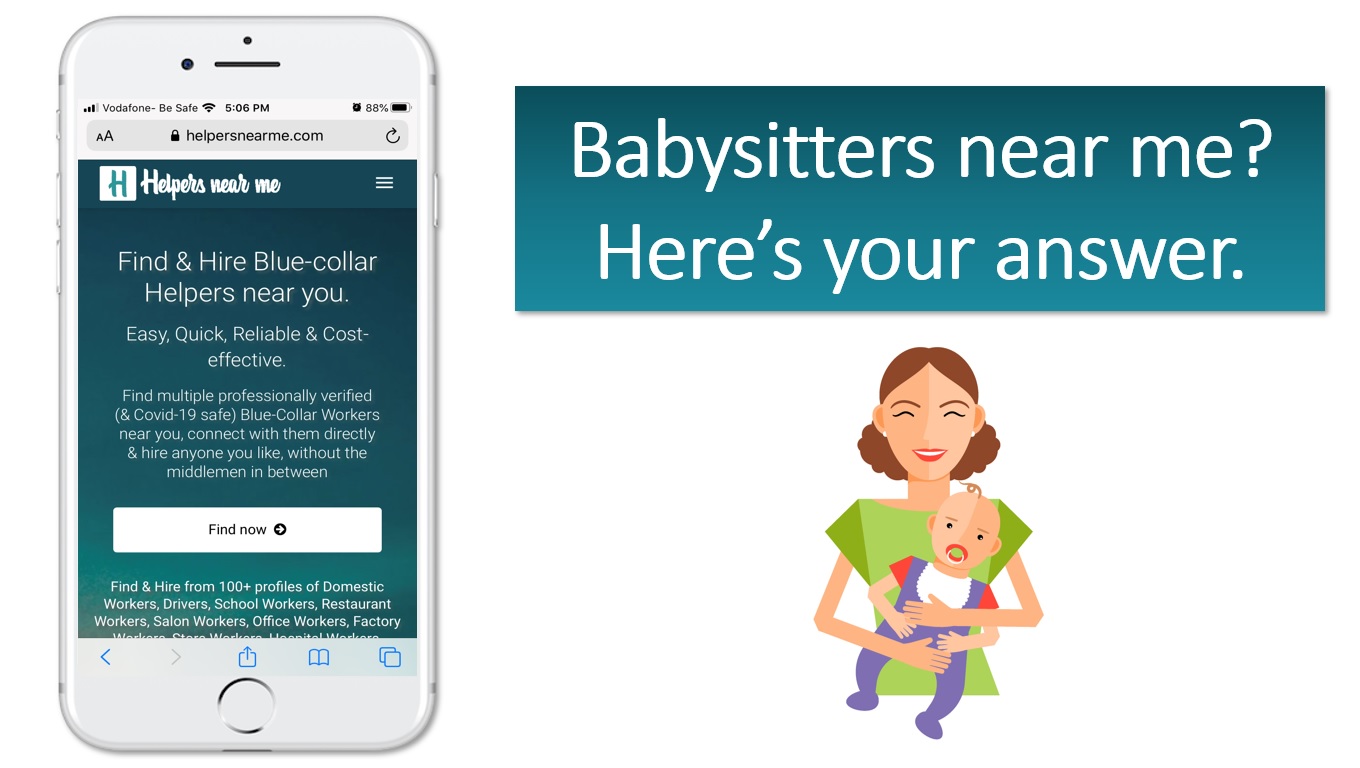 Wondering how to find a reliable Babysitter in Gurugram?

Isn’t it challenging to find one?

Try Helpers Near Me and connect with multiple Babysitters near you in just a few minutes.

I need a Babysitter! Have you ever wondered, when this thought pops up in your mind, what choices you have?

The obvious answers are:

And then after all this, you wait till someone shows up on your doorstep.

It is even more challenging if you want a live-in Babysitter.

Question is if booking a movie ticket or ordering food could be so easy, why can’t finding a Babysitter, Maid, Cook, Driver or a Helper be as easy?

Well, from today, you have an option.

It is a platform that makes it easier for anyone to find a Babysitter, Maid, Cook, Driver or other Helpers in Gurugram.

There are no Agents, no Contractors and no Commissions involved in between.

Helpers Near Me is a simple platform that connects you directly with Helpers within your vicinity.

In this age of digitization, Helpers Near Me uses mobile & web technology to help the people from the underprivileged community. It is helping them find relevant work opportunities in cities.

And in turn, the platform helps you find the Worker you are looking for – Babysitter in this case.

Here’s a real story in brief that explains the concept of Helpers Near Me better:

Meet Siso, a girl from Jharkhand, who came to Delhi in 2015.

She was in need of a job that could fetch her some money. Siso wanted to take care of herself and send a little saving to her parents in her village.

She was not a Babysitter by choice. She always wanted to be a Sports Athlete and wanted to represent her college at the State level. And finally wanted to join forces or the police as a career.

But her financial situation at home brought her to Delhi. She had to give up on her career to earn her living & support her parents back home in the village.

After a few weeks of her registration at Helpers Near Me, she got connected to a family in South Delhi where she currently works as a Babysitter.

The family was accommodating enough to ensure she studies whenever she gets some time.

Now, Siso earns her living, sends money to her parents and is also preparing for the career she had always dreamt of.

But come to think of it:

Today, the reality is that many Helpers end up paying a decent portion of their salary to Agents or Contractors in between.

And this is not just for one month. Many Helpers get only a portion of their hard-earned salary, every month.

10 reasons why you should try Helpers Near Me when you need to find a Babysitter in Gurugram:

1) The platform is helping the Workers find local employment

Through mobile & web technology, Helpers near me is trying to help the less educated underprivileged Workers. The platform is helping them find Work Opportunities by connecting them directly with you. Helpers register here free of cost and on their free will

2) It is convenient, easy & organised

At Helpers near me, you can find Babysitters or Maids at your convenience. It is Easier, Simpler & Better. 5 minutes and just a click of a few buttons, that’s all it takes to find a Babysitter here

Helpers Near Me verify the background of every Babysitter thoroughly. The platform follows a 2/3 Step Verification Process for every Babysitter. First, their IDs are verified. And second, their Criminal/Court Records are checked across thousands of District Courts in India. At an additional nominal fee of just Rs.199/-, you can even get this detailed Background Verification report emailed to yourself

4) Connect with the nearby Babysitters

The platform works in such a way that it lets you find multiple Babysitters in the vicinity of your house or search location.

5) Speak with multiple Babysitters, even though you need one

Helpers Near Me connect you with multiple Babysitters in every order. It gives choices so that you get to choose the best one among all the available options from around

Helpers near me has hundreds of Babysitters registered on its platform. So, when you place an order, you get the best of the choices available on the platform

7) Connect with Babysitters at a nominal fee only

At Helpers near me, you get to find multiple Babysitters at less than Rs.500/-. And once you hire your Babysitter from the available options, you don’t need to pay anything further. Less than Rs.500/- is all it takes

8) No Agents, Contractors or Commissions in between

At Helpers near me, you get to connect with all the Babysitters directly. There are no middle-men in between. This option saves the additional commissions that you would have to pay otherwise if you approach them.

At Helpers Near Me, you either get to find your Babysitter or you get your 100% refund.

So, next time when you need a Babysitter, a Maid or a Nanny, try looking for one at Helpers Near Me.

It brings together thousands of such Babysitters, Maids, Cooks, Drivers, Delivery Boys and many more such Helpers.

They are just waiting for one opportunity that could help them live a better life, without paying commission to anyone.