Home » How to find a good Cook for home in Greater Kailash, New Delhi? 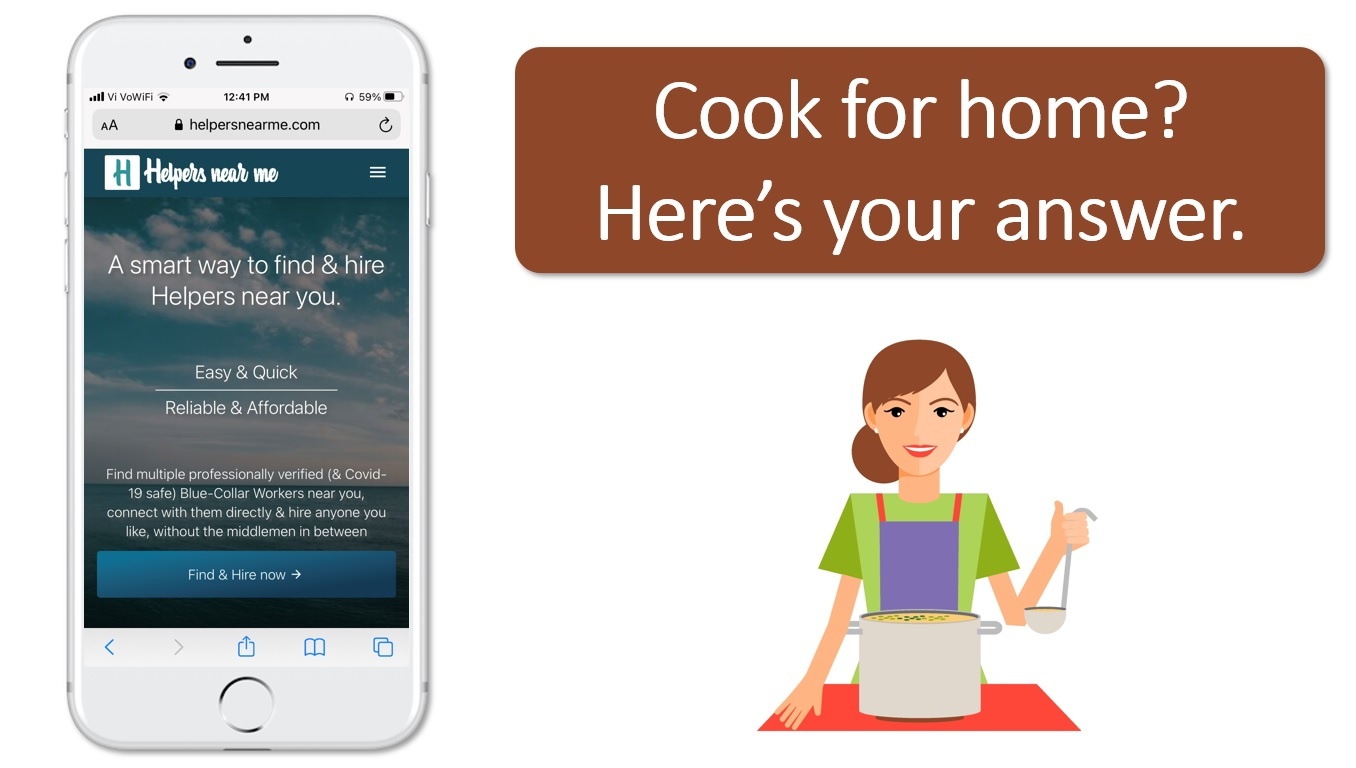 To find a good Cook for home in Greater Kailash, New Delhi is a big challenge.

Try Helpers Near Me and find a good Cook today.

In India, since times immemorial, we have a tradition where every family had (either permanent or occasional) a Maharaj who helped the mothers and women in cooking.

All of these, otherwise, is quite stressful for the lady of the house. And more so when the food needs to be cooked, thrice a day, every day.

Thankfully, for the South Delhi residents, this problem of finding a good Cook can now be solved at a click of a button with Helpers near me.

Helpers Near Me is an initiative which is working towards making it easier for You and the Cook to find each other, easily & directly.

There are around 75+ different Categories of Helpers that you can find through Helpers Near Me.

Cook is one of the much sought after category of Helpers along with other categories including Maids, Babysitters, Elder Care Helpers, Car Washers, Private Drivers, Full Day Maids, Part time Maids, and others.

There are thousands of such Helpers who have registered themselves on Helpers Near Me.

So, when you try finding a Cook for home in Greater Kailash, New Delhi on the platform, it automatically connects you with multiple Cooks from nearby localities.

With a vision of eradicating Forced Labour, Slavery, Human Trafficking, and Poverty, Helpers near me, started its operation in 2016.

It is a DIPP recognized startup, which uses Advanced Digital Platform as a medium to provide Work Opportunities to the less educated Unskilled, Skilled & Partly Skilled Unorganized Workers from the Bottom of the Pyramid.

Here are 10 benefits of trying Helpers Near Me when you need to find a Cook for home in Greater Kailash, New Delhi:

At ‘Helpers near me’, you can find Cooks at your convenience.

At ‘Helpers near me’, you can connect with multiple Cooks at less than ₹500 only.

They’ve all become a part of ‘Helpers near me’ so that they could get in touch with nearby Employers directly, without any middlemen in between.

So, when you look for Cook for home in Greater Kailash, New Delhi at ‘Helpers near me’ you get to connect with the best ones and the nearest ones to you.

‘Helpers near me’ follows a 2 Step Verification Process for every Cook, Maid & other Helpers registered on its platform.

This kind of a professional check not only ensures faith for the Helper but also provides the necessary security to you as a Customer.

With every search, ‘Helpers near me’ connects you with multiple Cooks from around your search location.

‘Helpers near me‘ is striving to provide the Helpers a professional way to find Work Opportunities.

In many cities, Helpers end up paying a hefty commission to agents & contractors just to get some work.

But when they register at ‘Helpers near me’, they get Work Opportunities directly from the Customers (You, in this case), without paying any money to anyone in between. This saves them a lot of time, money and energy for them as well.

So, next time when you need to find a Cook for home in Greater Kailash, New Delhi, try ‘Helpers near me’.

With multiple options of Cooks, at less than Rs.500/-, you get an opportunity to find the one that’s perfect for your requirement.