Home » How to find a good Cook for home in Jangpura, New Delhi? 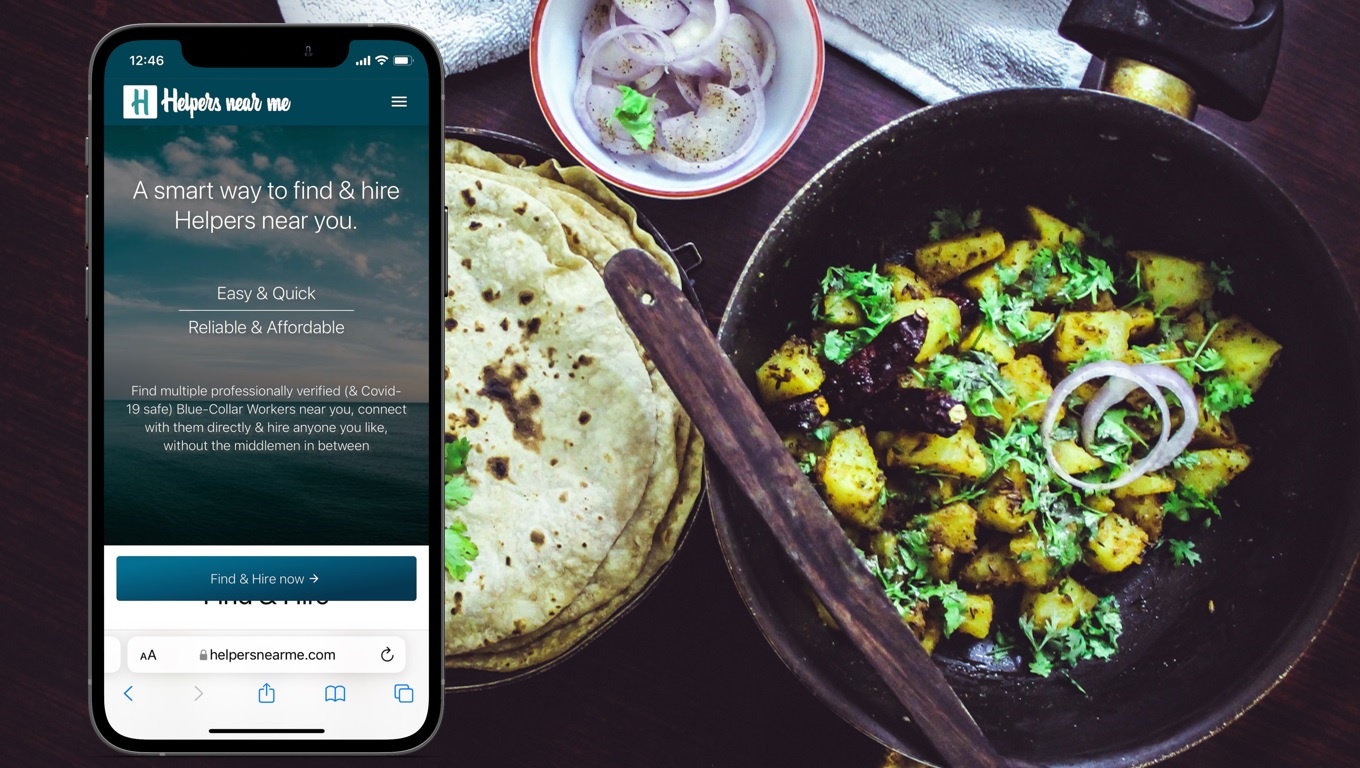 To find a good Cook for home in Jangpura, New Delhi is a big challenge.

Try Helpers Near Me and find your perfect cook today.

Even for Students, Bachelor or Joint families, a Cook can become a significant lifesaver.

They also did many other cooking tasks like cutting, chopping, slicing, peeling, etc.

All of these, otherwise, are quite stressful for the lady of the house. And more so when the food needs to be cooked a day thrice.

The reality is that there are many good Cooks available, but there are limited resources to find them.

Because usually, the process of Cook hunting starts with the Neighbors, Maid in a relative’s house, and Aunty’s maid and ends at Mummy’s friend’s Sister’s Bahu.

Thankfully, for the South Delhi residents, this problem of finding a good Cook can now be solved with Helpers Near Me at a click of a button.

Helpers Near Me is a startup working towards making it easier for You and the Cook to find each other easily & directly.

There are around 100+ different categories of Helpers that you can find through Helpers Near Me.

Cook is one of the much sought-after categories of Workers, including Maids, Babysitters, Elder Care Helpers, Car Washers, Private Drivers, Full Day Maids, Part time Maids, and others.

Thousands of such Helpers have registered themselves on Helpers Near Me.

So, when you try finding a Cook for home in Jangpura, New Delhi, on the platform, it automatically connects you with multiple Cooks from nearby localities.

Helpers Near Me enables millions of underprivileged and unorganized workforce to find local employment, free of cost, directly from nearby employers, without middlemen.

In turn, the platform makes it easy, quick, reliable & affordable for millions of employers to find & hire nearby blue-collar workers without middlemen.

With a larger vision to end poverty, forced labour, worker exploitation, and human trafficking, Helpers Near Me is working towards creating an ecosystem of inclusive economic growth for India’s underprivileged unorganised blue-collar workforce.

In your case, the platform connects the Cooks for home directly with You, without any middlemen.

10 solid reasons why you should try Helpers Near Me when you need to find a Cook for home in Jangpura, New Delhi:

1) It is Convenient, Easy to Use & Organised

You can find Cooks at your convenience at Helpers Near Me.

It is an easier, simpler & better way to find Cooks for home in Jangpura.

You can access the information directly from your mobile, and 5 minutes is all it takes to find a Cook for home on Helpers Near Me.

3) Connect with Cooks near you, around your location

Helpers Near Me connects you with Cooks available in your vicinity, not from far away.

The platform fetches a couple of Cooks options from around your location and connects them directly to you. It is the most convenient way to find a Cook for home from nearby.

Many things cost, but some things in life should not cost you as much.

You can connect with multiple Cooks at a nominal fee at Helpers Near Me, starting at Rs.99.

You are free to hire whomever you like from a couple of Cooks for Home options available.

Helpers Near Me has thousands of Cooks, Maids, Babysitters & other Domestic Workers and other Workers registered on its platform.

They’ve all become a part of Helpers Near Me so they can connect directly with nearby employers like yourself, without any middlemen.

So, when you look for Cook for home in Jangpura, New Delhi at Helpers Near Me, you connect with the best and the nearest ones to you.

Helpers Near Me follows a 2/3 Step Verification Process for every Cook, Maid & other Helpers registered on its platform.

Every Cook’s IDs & Criminal/Court Records get checked in detail.

This kind of professional check ensures faith for the Helper and provides the necessary security to you as a Customer.

With every search, Helpers Near Me connects you with multiple Cooks around your search location.

And since your requirements from your Cook for home are very personal to you, the platform lets you call & connect with all the Cooks.

Even the salary part is left between You & the Cook to decide so that you can find one who fits your budget. Likewise, the Cook gets the salary that he/she wants.

Helpers Near Me is a free-of-cost service for Workers.

9) There are no Agents, Agencies or Contractors in between

There are no middlemen involved in the entire process of connecting the Cooks, Maids & other Workers to you.

Helpers Near Me never works as an Agent or a Contractor. It is a free platform for all Unorganized Workers (Cooks, in this case).

Helpers Near Me strives to provide Workers with a professional way to find Work Opportunities.

In many cities, workers pay a hefty commission to agents & contractors just to get some work.

But when they join Helpers Near Me, they get work opportunities directly from you, without paying any money to anyone in between. This saves them a lot of time, money and energy for them as well.

So, next time you need to find a Cook for home in Jangpura, New Delhi, try Helpers Near Me.

With multiple Cooks options, at a nominal fee only, you get an opportunity to find the perfect one for your requirement.