Home » How to find a reliable Babysitter near me? 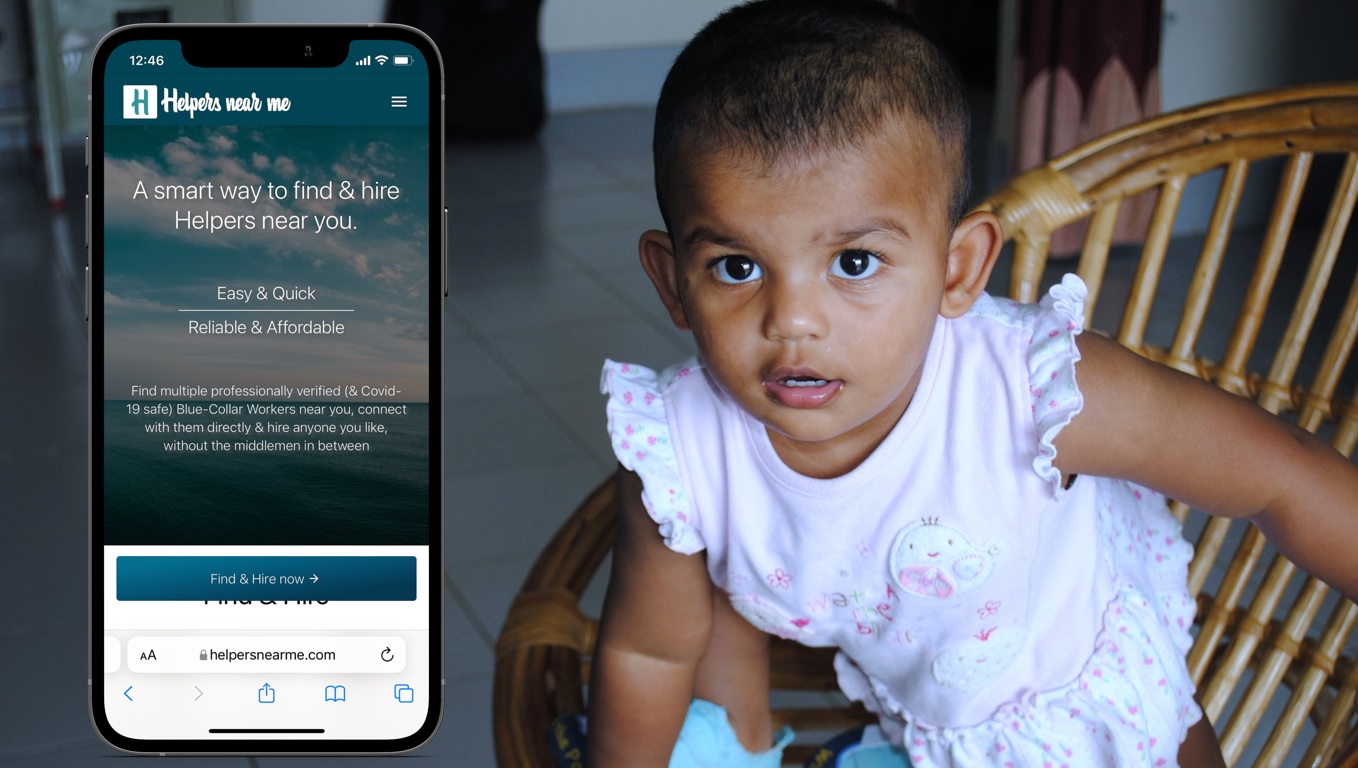 Babysitter near me – Are you searching for one online?

Probably your need to hire a babysitter is immediate.

Try Helpers Near Me today and connect with many Babysitters near you in a few minutes.

Connect with multiple profiles of Babysitters and hire the one who suits your requirement.

Have you ever wondered how difficult it is to find an answer to “a reliable Babysitter”?

Remember the last time you were trying to look for a Babysitter, what all do you have to go through?

FIRST, you had to ask your neighbours if they knew someone.

SECOND, you had to ask their Maids if they knew anyone who was looking for work as Babysitters.

THIRD, you had to leave your requirement to the nearest security guard you had come across.

And FOURTH, despite all this, you had to wait for a minimum of a few days until someone showed up on your doorstep.

By that time, your need for a Babysitter had become so urgent that you ended up hiring the first or the second one who knocked on your door.

And as soon as your problem of finding a reliable Babysitter got resolved, you did not bother too much about getting the background verification done for the person you hired.

After a few days, you were, sort of, okay with her work. And that was enough for you to move on with your life.

Until one day, when she left again, the whole process gets repeated for the next Babysitter.

Come to think, this process of “finding a Babysitter” is always taxing and, more so, very time-consuming.

Visit Helpers Near Me today.

From now on, you will not have to go through such a detailed process to find a reliable Babysitter near you.

Just follow these 5 really easy steps, and you should be able to find multiple Babysitters near you within 5 minutes.

1st Step: Visit Helpers Near Me, follow the ‘Find Now’ button and Login

3rd Step: View profiles of multiple Babysitters near you, with their ratings, background checks, distance, etc.

4th Step: Pay a nominal fee (starting at Rs.99/-only) and connect with every Babysitter featured in your search result.

5th Step: Speak with all of them, meet with whoever you want and hire anyone you like from the list

And once you have hired someone, pay the monthly salaries directly to the Babysitter.

Now, compare this with all the hassle you had to go through when you were looking for a Babysitter earlier – a lot of references here & there, a long wait, and in the end, only 1-2 people knocked on the door, etc.

On the contrary, if you try Helpers Near Me, you would save all the trouble you had to go through before finding a Babysitter near you.

Read some of the Customer Reviews. Find what they have to say about Helpers Near Me.

Furthermore, here are 11 promising reasons why you should try Helpers Near Me when you are searching for ‘Babysitters near me’:

Helpers Near Me is an Easier, Simpler & Better way of finding Babysitters.

5 minutes and just a click of a few buttons that’s all it takes to find Babysitters at Helpers Near Me.

Finding Babysitters was never as easier and as organised earlier.

Helpers Near Me follows a 2/3 Step Verification Process for every person registered with the platform.

Furthermore, you can also get your other domestic workers verified by this process. It does not matter if they were from Helpers Near Me or elsewhere.

The primary objective is to help you do proper due diligence for your domestic workers before or after you’ve hired them.

3) Connect with nearby Babysitters

Helpers Near Me connects you with Babysitters in the vicinity, preferably within 1-2 km of your search location.

They may be available for the full day or may just for a few hours of the day.

4) Speak to multiple Babysitters at a time

If available, Helpers Near Me connects you with multiple babysitters nearby, not just one or two.

Honestly, even you want choices.

Moreover, when you would want to hire a Babysitter permanently, you would always want to meet with a few before deciding who to hire.

To give you enough choice, Helpers Near Me tries to connect you with as many options of Babysitters near you.

5) Find & Hire Babysitters at a nominal fee only

At Helpers Near Me, you get to connect with multiple Babysitters at a starting fee of ₹99 only.

There are no additional charges beyond this.

Except only when you want access to the Babysitter’s background verification report from Helpers Near Me.

The background verification report of the Babysitter you hire is available at a nominal fee of Rs.199/- only.

Unlike many traditional maid service agencies, there are no commissions here at Helpers Near Me.

A nominal fee is all that you pay in the process.

6) Get the best-rated Babysitters from a vast pool

A unique rating system allows Helpers Near Me to connect you with the best Babysitters from around your search location.

7) Empowers the Babysitters to connect with you directly

Helpers Near Me supports the Babysitters, and many other workers, in finding local employment opportunities.

The platform does so by connecting the Babysitters directly with you.

She can decide and opt for the work out of her own will by connecting directly with you.

Furthermore, the Babysitter gets to decide her salary as well.

The workers join Helpers Near Me willingly and free of cost.

At Helpers Near Me, since you connect with the Babysitters directly, there are no middlemen & commissions in between.

At Helpers Near Me, there are no such commissions in between.

It is a straightforward platform that uses technology to bring you and the workers together so that you connect and take care of each other’s requirements.

9) The Babysitter gets to earn her full salary

Every Babysitter or Worker who gets hired through Helpers Near Me gets an opportunity in their life to earn a full salary.

Even now, many maid service agencies and contractors who provide housekeeping services take salaries directly from you or the company and pay the worker after deducting a monthly percentage.

Unlike the maid service agencies, the Babysitters earn their full salary by connecting with you directly.

Every transaction processed at Helpers Near Me goes through well-known payment gateways like Paytm, PayU & others.

Helpers Near Me follows an excellent Customer-friendly 100% Refund Policy.

Every transaction at Helpers Near Me comes with an assurance of helping you find a Babysitter or any other workers you might want to search on the platform.

Learn more about the Customer-Friendly 100% Refund Policy at Helpers Near Me.

Imagine this kind of convenience on your mobile phone.

And being able to find a Babysitter near you in just 5 minutes & 5 easy steps.

This comfort solves all the trouble you had to take otherwise to find a Babysitter.

So, next time you need to find a Babysitter near you, try Helpers Near Me.

By far, Helpers Near Me is the easiest way you can find one.

Along with Babysitters, Helpers near me also has many other Helpers registered on its platform who work at Homes, Offices & Small Businesses. Like Full time Maids, Cooks, Drivers, Babysitters, Security Guards, Beauticians for your Parlour business, Helpers for Elders, Car Washers and many others.